Implementation details for a proof of concept for compliance with GDPR on an Event Sourcing architecture built with Apache Kafka. 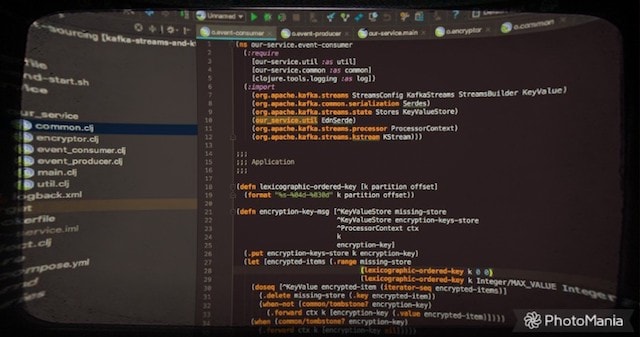 This post contains the implementation details of this other post about a possible architecture for Kafka, GDPR and Event Sourcing. Please read that other post for context and conclusions.

The proof of concept (PoC) uses Kafka Streams API and all code, including a docker-compose environment to test it, is here.

The encryptor job is pretty easy: the first time that it sees a key, it needs to generate a new encryption key, store it and push it to the encryption-keys topic for other consumer. In code:

After we have the encryption key, in the PoC we just encrypt the whole value of the message and forward it to the encrypted Kafka topic, but during the implementation it raised the question about whether it would be more appropriate to encrypt just the PII data within the message. Some possible options:

The second option seems the simplest one.

The Encryptor also listen to the GDPR messages and when the user exercises the right to erasure, we store a tombstone both in the local store and in the encryption-keys topic:

We will explain in the Event Consumer why a tombstone and not just delete the record.

Another decision that we need to make is what to do if the encryptor gets a message after the user has exercised the right to erase:

It will depend on a business decision, but either the first or last options seem like the most sensible ones.

Ideally, we don’t want to change the Encryptor every time there is a new topic that needs to be encrypted.

While KafkaStreams allows to subscribe to a set of topics based on a regular expression, and it will subscribe to newly created topics that match that expression, there is no obvious way to publish a message to an arbitrary topic.

Maybe the correct way is to provide a KafkaClientSupplier to the KafkaStreams, so that both our code and the KafkaStreams code use the same Kafka producer, but we decided to do what a SinkNode does:

Never a good idea to use an internal api, but good enough for the PoC.

But even if this solves the problem of sending messages to an arbitrary topic, there is a bigger problem: to be able to reuse the Encryptor, all input topics must be copartition (aka. must have the same number of partitions).

If the topics do not have the same number of partitions, then two messages for the same user in different topics can end up in different instances of the Encryptor service, which means that each instance will generate an encryption key and push it to the encryption-keys topic, one overwriting the other, making some messages unreadable.

As copartitioning all topics is unlikely to be desirable, we probably need to split the Encryptor in two: one app to generate the encryption keys and another one to do the actual encryption. Something like: 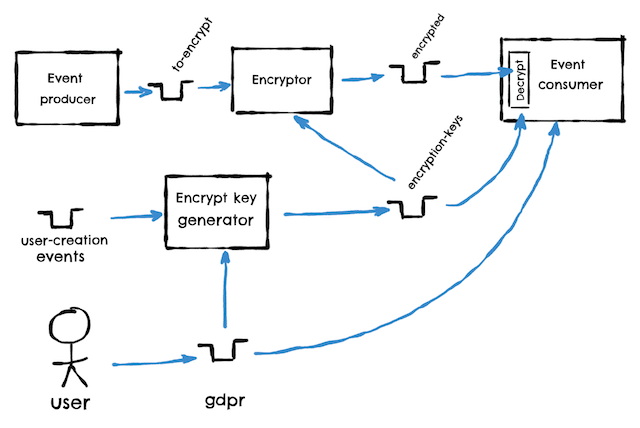 Unfortunately, even if Kafka Streams tries to give you some control over the order on which messages are processed, some testing showed that if there are a lot of events in the encrypted-data topic, the first batch of events will all come from this topic and none from the encryption-keys topic, which means that none of the events was decrypted because none of the encryption keys was known at that time.

For this topology, processing the encrypted data is pretty simple:

If the encryption key is not known yet, we store the event. But when the encryption key arrives, we will want the order of events to remain intact, hence we need to somehow remember the arrival order. There are two possible options:

Lets see how we use it when the encryption key arrives:

Notice that we are using the range method, that even if it doesn’t guarantee an order, the actual RocksDB implementation does. Another implementation detail that we should not depend on.

Even if this implementation guarantees the order of events for a given user, notice that it doesn’t guarantee any order between users, so it is possible that during decryption there is some reordering of some messages. To guarantee the order of all messages, we would need to store every message after the first one missing the encryption key, even for those that we already know the encryption key.

Last, we prefer a tombstone in the encrypted-keys topic, over just deleting the encryption key, so that the consumer can clean up any events for that user. If we did not store a tombstone, the consumers could store events in their local store forever.

Back to Kafka, GDPR and Event Sourcing.