For a long time I thought lines of code was a bogus metric, but after working in both Java and Clojure, I have changed my mind.

After more than 15 years of Java experience, I have tended to brush aside comments about Java’s verbosity with one of the following arguments:

LOC metrics are simply not important.

Some time ago we started building our first Spark jobs. The first two that we wrote where basically the same:

It so happened that we wrote one in Clojure and one in Java. When we reviewed the code, this is how the Java version looked: 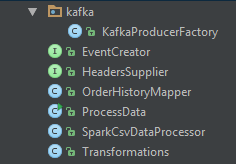 At first I was surprised that there were so many classes.

But why was I surprised in the first place? Probably because the Clojure version looked like this:

Perhaps the Clojure version was a completely unreadable gibberish of magic variables and parentheses all over the place? Here is the main transformation logic between the two versions:

The only difference in readability is that the Java version has a lot more parentheses.

I usually would not pay attention to Java’s verbosity, but during the Java code review I found myself thinking about:

While the Clojure code review was about:

This made me realize that the Clojure version was way simpler to understand, and that the fact of having a single file with 58 lines of code was a very important reason for it.

What about bigger projects?

I don’t have any bigger project where the requirements where exactly the same as in here, but it is true that our Clojure micro-services have no more than 10 files, usually 3 or 4, while the simplest of our Java micro-service has several dozens.

And from experience, we know that the time to understand a codebase with 4 small classes is not the same as understanding one with 50 classes.

The answer is that all those extra lines of code fall into the incidental complexity bucket - that complexity that we (programmers) create ourselves by not using the right tools, complexity that our business paid us to create, pays us to maintain, but never really ever asked for.

Imagine deleting 87% of all the code that you have to maintain!